For visitors who would like to learn more about the visions, values and people that serve as the foundation and guiding force for Rainbow Hearth, we have created this page to share with you. We hope you enjoy learning about why we feel Rainbow Hearth is such a special place.

For visitors who would like to learn more about the visions, values and people that serve as the foundation and guiding force for Rainbow Hearth, we have created this page to share with you. We hope you enjoy learning about why we feel Rainbow Hearth is such a special place.

Explanation of Our Logo

The fuchsia background represents the energy of our Source in which all resides.

The egg represents the protective cocoon of our energy field.

The seven arcs of rainbow colors represent the full spectrum of visible light. Each separate color has unique qualities and attributes. Together they merge into the great white light.

These seven colors also represent the colors of the charkas, or energy centers, within our bodies.

In addition, the seven colors also represent diversity of all beings coming together as one.

Inside the egg is the quiet place in which we come together with Our Source - represented in fuchsia.

The complete symbol represents the atom and the enormous energy contained within as latent power.

When these symbols touch and connect they form two hearts, also intertwined, holding heaven and earth.

At the center of these merging infinities and hearts is source energy, radiating and including, collapsing duality into oneness and love.

In the spring of 1981, Mariah Wentworth visited the lands that would become Rainbow Hearth Sanctuary for the first time. For several months she had a series of extraordinary visions and mystical experiences that inspired and challenged her to devote herself to creating a space of retreat, learning, and healing.

She met her future husband, Richard Gerstner, in 1985. She shared the vision and he claimed it as his own. Together, they slowly and carefully acquired the land and created the infrastructure of Rainbow Hearth Sanctuary and Retreat Center. Richard died in early 2007, shortly after completing his self-appointed mission as designer-builder. His intelligence, ability, and great heart are sorely missed and yet still deeply present as we move into our next cycle of service.

With the Heart of Love I feel
Your Presence, warm and real
No need to touch you with my eye -
We touch always when we fly
As One
Into the sun 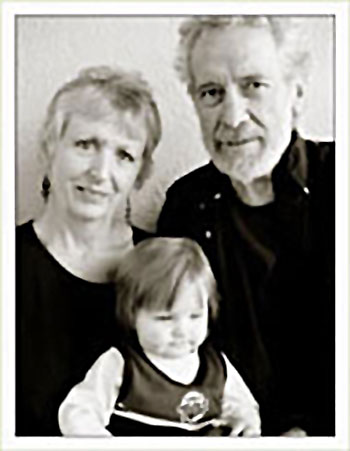 As co-creative beings at a pivotal point in human and planetary unfolding, the guardians of Rainbow Hearth dedicate ourselves to embracing a Big Picture with boldness and love seeking to fill our day-to-day lives with beauty and meaning, and bridging the reality of "what is" with the promise of "what can be."